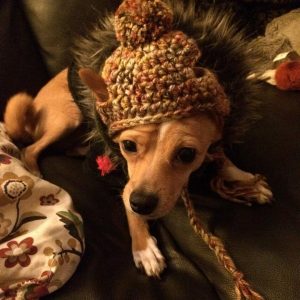 In fall 2016, Oscar was adopted by Erin. “I can definitely say, having Oscar in my life has been the best thing that ever happened to me.  Oscar is a mommy’s boy who doesn’t like to leave my side. Whenever it’s bedtime, or when I take a nap, he will crawl underneath the covers and press himself against me.  He loves going to Bruce Pit and has no problem wrestling with the bigger dogs. Currently I’m taking a class to become a certified dog trainer and I get to bring Oscar to class with me! He has mastered sit, lay down, stay. fetch, shake a paw and he knows clicker commands.  I’m hoping down the road to make Oscar a therapy dog. Thank you for bringing Oscar into my life!” 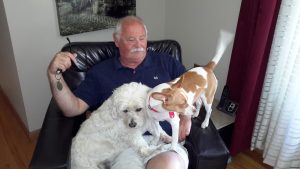 In spring 2016, Phoebe was adopted by Mara. “Phoebe came to me on Mothersday this year as a foster from Ohio. She completely stole my heart when I opened the door of her crate and she stepped into my arms. I also have a nine year old Laszo Apso and was a little worried about bringing in another dog.  However after about 2 days of sniffing and a bit of growling they completely have accepted each other and are best friends. Phoebe is very affectionate and quiet. She hardly ever barks at all. She is a digger. I have about 20 holes in my front yard to prove that. My life has greatly improved since she came into my life and I think that I have improved hers as well. Minpinerie Ottawa has been great and very caring and helpful. What a great job you all are doing.” 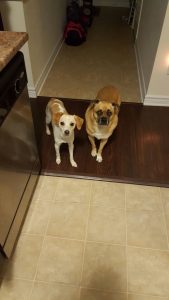 In late 2017, Skip was adopted by Jessica & Alex. “Things are going great, we went to Bruce Pit yesterday and he did very well off leash. He is warming up to Alex faster than we could have predicted as well. I am attaching pictures. This Wednesday he starts obedience classes for 6 weeks at Petsmart. Thanks again for everything!” 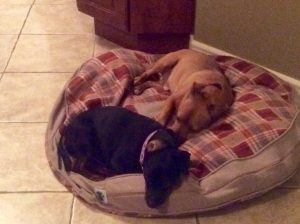 Ti-Gars et Ti-Loup were adopted by Anick in 2016! “On est arrivé… c’était stressant la route mais on est tellement bien maintenant. On est crevé mais on a tout ce qu’on a besoin ici, même des lits dans toutes les pièces ! On a bien mangé aussi, mais j’ai mangé trop vite et j’ai vomi… pas grave (Ti-Gars). On a fait 2 tours de la maison dans l’herbe… pleins de senteurs nouvelles. Et on a pas fini de découvrir la maison. On continue demain, trop fatigues là. On est bien ensemble, on ne se lâchera jamais maintenant.” (We will add that these guys were adopted a long time ago but returned to us years later through no fault of their own, and we ARE SO HAPPY THEY HAVE FINALLY FOUND A FOREVER HOME! THANK YOU ANICK!!) 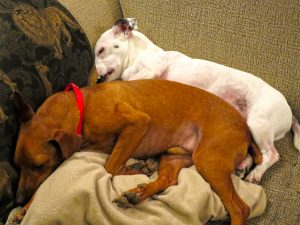 Hutch was adopted by Karen and Dean in late 2016. “I just wanted to send a little update and let you all know that Hutch is settling in with us fabulously! We love him to bits and are really enjoying him and have started doing a bit of training. He is sitting on my lap as I write this! Thank you to everyone who had a part in Hutch’s journey and took care of him before we came along. If I have missed sending this to anyone, please let everyone at the Minpinerie know we are very grateful. Thank you so much for giving us the opportunity to adopt Hutch, we really appreciate it.” 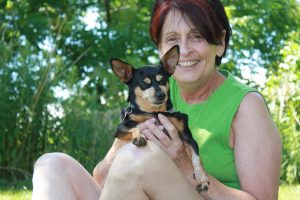 In August 2016, Audrey was adopted by Silvia! “I still remember Audrey’s picture in Minpinerie’s website. I fell in love with that face but we were doubting if she would be my perfect match and Louise proposed I try her, and of course I fell for her. It took a bit longer for her to bond with me, but oh boy, I wanted and still do, to make the rest of her life as happy as I can. She still dislikes dogs getting on her way when we walk, but she came a long way with people. She is curious, cuddly, stays 9 hours by herself and the house is the same way I left it (she doesn’t clean though 🙂 She is my baby, my companion, my personal trainer. Without her I would come back from work and not go out till next morning.  We were worried for her health but after detailed lab tests, everything came back normal. I thank Louise for her patience and help and the rest of the volunteers at Minpinerie. Adopting Audrey was almost a life saver for her and for me.” 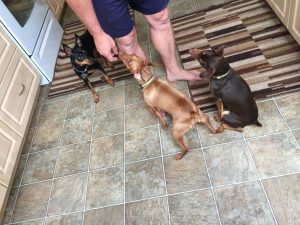 In July 2016 Adrian was adopted by Jim and Heidi and renamed Huck. “We have three rescue pins and all have their own story. Fyn was rescued from Ohio nearly three years ago and Jack who we  took in on New Year’s Eve last year.  Huck is the baby and runs the house we call him our brat as he is always the instigator when something has happened. Fyn is our nervous nelly but keeps Huck in shape with their constant play inside and out. Jack is laid back and a snuggle bug. All in all a busy pack we have. Thanks again for all the work you do and an extra hats off to Deb who has worked so hard to get us our little angels.” 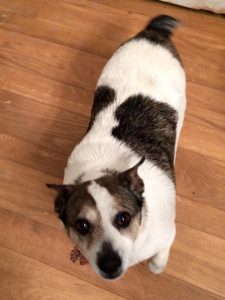 In May 2015, Sadie was adopted by Fern! “I thought I would let you know how she is doing now.  The winter was a little hard on Sadie.  She was not used to the cold but I am proud of how she survived the winter.  She would go outside to the bathroom and be back in within a couple of minutes.  If the temperature was around zero I would put her coat on and take her for a short walk.  Twice at the beginning of the winter I had to carry her the last half block home.  Her feet were too cold.  Tried little booties but they came off most of the time.  Her feet are so small.  The last couple of months she did not mind the snow and actually liked tromping thru it if it wasn’t deep. I was worried about her gaining weight when she wasn’t out walking but watched her diet carefully.  I would like her to loose another 2 to 3 lbs.  Her legs are so tiny to be holding all the weight.  She does have good muscles in her legs now.  Now that the weather has warmed up we go for at least 2 walks each day and she gets lots of exercise running around in the back yard. In the morning we have a pet time before she goes for her morning walk.  She is still stubborn.  If she does not want to do something, she will not do it.  I have had to carry her in the house several times when she would not come in. Thank you so much for letting me adopt Sadie.  Thank you also to all the volunteers who made Sadie’s trip to Ottawa possible.  She is a real treasure.”


Jake was adopted by Allan in 2016! Jake says “Today, I celebrated my first birthday in Nova Scotia.  My Dad made me a special doggie birthday cake. I must be special for my Dad hates to cook. Our first year together has been fantastic.  Neither of us can imagine life without each other. We are like 2 peas in a pod. When we go for our long walks three times a day, everyone knows me. Other then dog owners usually cross the street when they “hear me”. However, I have made quite a few new friends with the other dogs on my street and we get along just great.  I just want to show any strangers ( new dogs) that although I may be vertically challenged, I am still a doberman like those other big shots. My dad tells people that I am a doberman trapped in a Chihuahua like body. Anyway, thank you both (Louise and Ruth) for rescuing me and matching me with my new Dad. You both will always be my guardian angels!!!”