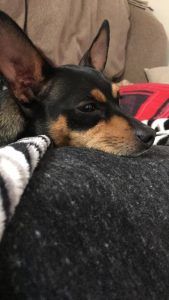 Phil and Su adopted Taz on February 24th of this year.(he’s the one in the red collar). “He fit right into our little pack of Coco (cute little girl beside him on the couch), and the two Siamese cats Spencer & Elmer. He is great company for all of us even the cats.   We would like to thank all of you at Minpinerie for all the work you do for these very deserving little creatures and thank you for bringing them into our lives. P.s. Coco is also from the Minpinerie. We got her 2 1/2 years ago.” 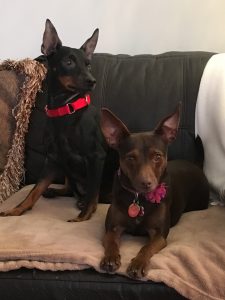 Tom and Sharon say “We are so overwhelmed with our little Tripod Spencer, we kept his name.  He was rescued from Tenneesee and thru Minpineerie we adopted him in early Feb. 2017.  H is so well behaved sleeps at least 11 hrs per night.  Loves the companship of both large and small dogs..What an addition after losing our 2 shepherds. Our vet informs us he was born without the missing leg.   You would not even know the way he runs jumps etc. Thank you.” 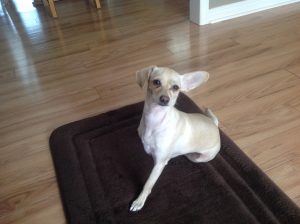 Archie (was Shorty) adopted March 2017. Krystyna says “Adopting Archie is one of the best decisions I’ve ever made. He is such a sweet, funny dog and I couldn’t be happier that he is part of my life. Archie arrived at my house on the coldest day in March from Tennessee. He has made himself at home. I’m also fortunate to be able to bring him to work with me, he even has his very own office chair! Archie is the perfect office dog. My co-workers adore this cutie as much as I do. Thank you so much to the team at Minipinerie for rescuing Archie and always being available to answer all my questions!” 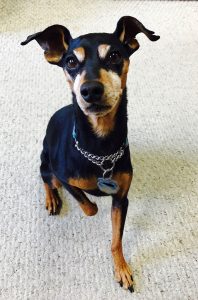 Renee calls Romeo (originally Romo) “my little bundle of love. I started fostering Romeo in October 2016, he is so kind, loving, playful and very energetic for a senior dog! However, unbeknownst to me and the agency, Romeo had some medical issues. They culminated in December 2016 when he spent 3 nights at the hospital with possible pancreatitis, an inflamed liver and sludge in his gallbladder. Those were easily the saddest 3 days of my life, but with the help and support of the Minpinerie, he made it through. I knew then that I wanted to spend as much time as I could with my little man! He has been adopted since February 14, 2017 (romantic, I know). Romeo goes everywhere with me, including the Pride Parade most recently. He is the best decision I ever made.” 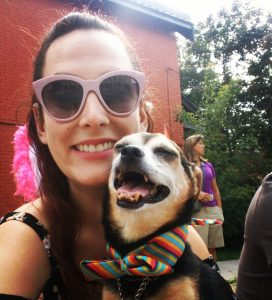 Nikki and her family adopted Kevin (formerly Odie). “As you can see he fits right in. He sleeps under our covers with us and is forever in my shadow. He’s been a wonderful addition and he has changed so much over the last 6 months. He’s less skiddish and yappy now. He’s learning to trust that people coming and going from the house are safe. Here he is with his new haircut. He is also seen here with his new fur brother Lloyd our St. Bernard.” 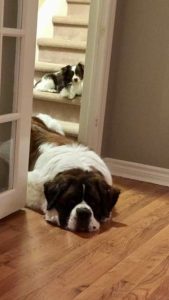 Paco was adopted by Michel and his family and is now called Skipper “because he has a bit of a skip when he walks as a result of luxating patella.  He’s come a long way, Kentucky to Ottawa and now to our home.  He enjoys his daily walks and snuggling with us on the couch.  He loves to sit in the sun but does not like the cold.  He’ll definitely appreciate our time in Florida this winter.” 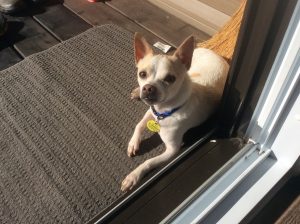 Minpinerie volunteers Treena and her hubby adopted Franklin (was Rascal) in September 2017, originally from Kentucky. He is their second ‘Kentucky Special.’ “Frankie is a dream. Great with the cats, great off-leash, playful and sweet, and throws a lot of heat in bed! Just a big puppy and is learning his manners. He has had a hard time over the past two weeks winning a place in Buttercup’s heart, but finally he has done it. They are now playing well together and she’s getting over her loss of her beloved Teddy with his help. We are thankful for this little doll and look forward to laughing at him and snugging with him for years to come.” 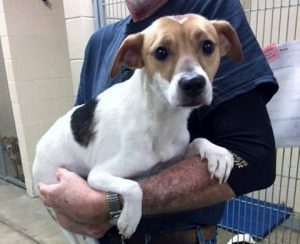